When innovation is not enough *

At this moment while half of the planet is attentive to the great event taking place in Brazil, in this corner of the world the richest man on earth and his wife give an extraordinary speech to the generation 123 from Stanford to nearly 3,000 students, half of them PhD students from 83 countries.

One of the things that struck me the most about Bill Gates’ speech was his tireless sense of curiosity, of questioning himself about his previous decisions, taking away the solemnity of his words, and past successes, even a “nerdy” sense of humor. I could see in his personality great traits of human simplicity. For example, the fact of getting personally involved and monitoring the impact – nil by the way – of computer donations destined for poor schools, led him to notice other types of basic deficiencies such as water, sanitation and ultimately health problems, which It led him to get seriously involved in addressing that problem once he left Microsoft management. In the first part of his speech I was able to glimpse a great dose of humility and something came to mind that he himself mentioned and that was collected in the book “Enough of Stories” by Andrés Openheimer :“ Latin America needs to be more humble and recognize its lag, make a diagnosis and not follow through acting as if everything was fine .

The central theme of Bill and Melinda’s speech was about the disparity that is being generated in the world and they exemplified this with several experiences lived first hand when seeing extreme poverty in South Africa, India and right here in the United States. The conclusion they reached and their proposal to solve it caught my attention. Being at the favorite University of his family, Microsoft and his own foundation highlighted the innovative power that is generated here at Stanford by its students and alumni in order to provide a solution to the great problems of humanity. He highlighted the dizzying acceleration of innovation that the world is producing, with Stanford at the apex of all this, producing new drugs, new schools of thought, companies with great global impact, Nobel laureates and outstanding professionals who are supposed to improve our lives. Paradoxically, when asking many people in the United States about whether the future will be better than the past, the majority respond negatively, then who is right? Bill says he does not share the opinion of the pessimists, but at the same time, he gives them some credit because from his point of view if innovation is only directed by the market, then it does not solve the problem of disparity in the world, it even accelerates it .

At the end of the speech, Bill reflects that if this optimism does not solve issues such as malaria, the poverty of the majority of farmers, schools without toilets or water or electricity, in short, problems that affect a large number of human beings it is because that optimism lacks empathy . 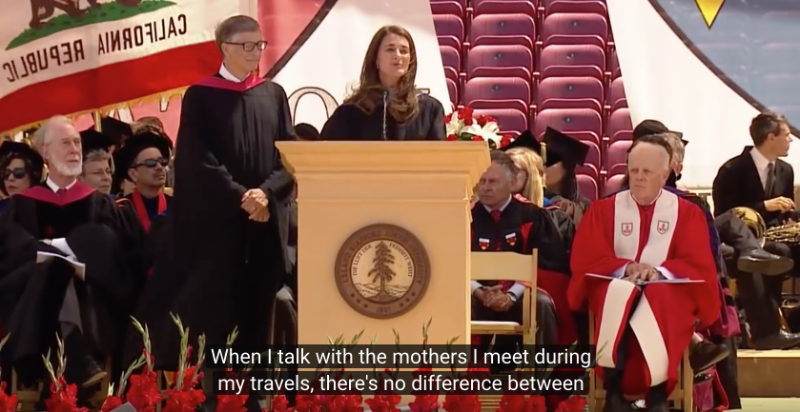 Optimism fuels innovation and new ways to alleviate suffering, but if you never see people suffering, that optimism is useless. If our enthusiasm and optimism does not have empathy with the most disadvantaged, then we are not solving problems, we are only playing to move pieces of “puzzles”. In the end Melinda Gates, pointed to a great truth < / strong>, about the great luck that his audience has suffered and suggested an exercise to be more empathetic with those most in need, thinking that they could be the ones who are in another reality. All the mothers he has met on his travels want, wish, yearn for the same for their children, the difference lies in the means available to them.

In short, the final exhortation of both to the new professionals is to add that empathy – approaching those most in need – and put all their talents and energy into solving those problems. “That way we will surprise the most pessimistic.” This “recipe” I had already read not long ago, in the document Caritas et Veritate ”n. 6 but with other words. The same advice but from two very different great leaders: one the richest man in the world and the other the most prolific Catholic theologian of modern times. Coincidence? For something I insist to the participants in our programs and experiences that we generate here in Silicon Valley is that we can start with the reduction of that disparity from our companies and organizations if we flatten the hierarchies more, if we learn to listen to all the members of our organization regardless of its level, if we try to get off the pedestals that sometimes without realizing it we climb. In this way, we will be more empathetic and will contribute our grain of sand to improve the disparate world in which we live.

A fortune , which Bill Gates has, but a bigger one is to have talented and hard-working friends who graduate from universities like this one.

Sunday reflection at the car wash.

What’s going on in Silicon Valley?

The light at the end of the tunnel?